Hues and the Abstract Truths

This painting is part of an ongoing series of large-scale concentric circles that Lu has explored for more than a decade, its titular allusion swirling literary magical realism around Lu’s own classical piano background to arrive at the otherworldly mental realms her paintings summon. “One Hundred Melodies of Solitude, No. 22” appears to vibrate with levitating energy, regions of its blue expanse scattering light to create fuzzy, blurry sections that disappear when the eye tries to contain them. The painting initially captures attention with little more than its visual splendor. And Lu is only one of five artists equally adept at holding the mind’s eyes currently on view at Mono Practice.

The intimate group show, Order and Uncertainty: Five Abstract Painters, features painters who share what curator Timothy App calls a classical impulse to bring order to abstraction: the Connecticut-based Power Boothe; the late Julie Karabenick; Californian Patsy Krebs; the College Park art professor W.C. Richardson; and the Baltimore-based Lu. App, a veteran abstractionist and former MICA painting instructor himself, argues in his exhibition essay that these painters “launch their work employing a clear set of a priori variables, a lineup of concrete precepts from which they venture outward, wending their way through uncertainty towards unforeseen discoveries”—or, reductively, they share similar approaches that produce individual results. App wisely doesn’t try to bring these artists into conversation with each other in Order so much as he selects a few choice cuts from each and delivers an incredibly solid mixtape.

Consider Boothe and Richardson. A quick glance at either’s works here reveals an interest in the orderly disorder of intersecting lines. Boothe, a University of Hartford professor of painting, started his painting career in late-1960s New York, and over the next two decades he also made short films and designed sets for experimental theater/dance performances. He was also co-director of MICA’s Mount Royal Graduate School of Art from 1993-98, and fellow ’90s art-going denizens may recall his work from that era: grid-based abstractions that suggested the inchoate interplay of light and shadow. His recent work finds a more musical and airy lyricism among grid axes, and App opts for two paintings that capture the artist’s breadth: “Set-reset” (1997) is an earthen distillation, oblique intersecting lines in various hues of shiny steel oxidizing into rusty hues appear to emerge like an archeological find from Boothe’s moody taupe background. “Strange Loops” (2021), his more recent work, we’ll return to in a bit.

Richardson’s intersecting lines pursue more psychedelic territory. “Riptide” (2006) suggests an otherworldly arabesque, as what appear to be patterns overlaid atop different patterns reveal new designs, and Richardson’s color control creates a disorienting sense of depth. “Javari” (2020) is even more intense: bars of matte black appear to struggle against the rectangular brick-red lines that contain them, and the high contrast these color combinations make against the white background allows Richardson to smelt a 31-inch-square canvas that smolders like hot metal jumping-jacks scattered over a light table.

Karabenick, who passed away in August 2020, was a Michigan-based painter who explored geometric abstraction, and her two works here highlight a visual thinker who understood the kaleidoscopic potential of simple shapes. Both her acrylic-on-wood-panel works “Sun Worship” and “#12” create a soothingly woozy rush. She overlaps polygons of color into a geode somehow contained inside a 22-inch-square canvas in “#12,” an impish delight. Karabenick pushes that playfulness into the spiritual with “Sun Worship,” a 24-inch-diameter goldenrod tondo of celestially arranged shapes whose palette feels pulled from gigantic boxes of crayons, producing an unassuming sense of awe.

Please don’t allow that childhood reference to suggest anything childlike about Karabenick’s work; she also maintained/curated the scholarly website Geoform, devoted to other artists using geometric form/structure in contemporary abstract art, which includes thoughtful, illuminating interviews with both App and Richardson. I found App’s interview interesting, particularly the opening exchange in which he describes the layers of geometric influences on his mind. He moves from admitting that admiring geometry’s “logical way of dividing form and space has been with me since childhood” and mentions his interest in objects before moving into more layered observations. He talks about recognizing the geometric forms present in “Catholic Mass and its cyclical, opulent rituals”; sports, and their “pristine, geometric aesthetics of playing fields—baseball diamonds, tennis courts, football gridirons, golf courses”; music’s “reliance on mathematical organization”; before finally talking about the natural world: “Geometry, I would postulate, underlies appearances in nature. It is a universal that points to the particular, and therein lies the metaphysical nature of my work.”

Let’s keep that metaphysical entreaty in our brain’s back pocket for a moment. App, Boothe, Karabenick, Krebs, and Richardson are roughly contemporaries, by which I mean their CVs show their professional lives starting in the 1970s. I point that out merely to put a context to what we’re witnessing in this modest but potent exhibition. When I think of 1970s American art, what springs to mind are today’s mainstays of the “contemporary art” section in museums, those buzzwordy grandchildren of abstract expressionism’s 1950s market explosion: the continued rise of 1960s activity such as conceptual art, minimalism, pop, and performance/installation, but also land art, feminist art and its feedback loop with feminist activism and scholarship, the uncanny valley of hyperrealist painting, the light and space movement, graffiti, and the massive explosion of photography and video art.

Abstraction isn’t always what I associate with that era, especially when I think about the 1980s decade that followed and the way neo-expressionists salad-tossed abstraction with representational and even figurative modes and contributed to transforming art into the still-percolating international bull market that it remains. Abstraction as a painterly pursuit was so anathema that an essay in the September 1985 issue of Artforum goes so far as to open:

“Does it make sense to create abstract art today? Several prominent abstract artists have themselves spoken of the ubiquitous bankruptcy of the mode. Most abstract art has now become either corporate or academic design, and thus necessarily emptied of challenging meaning. It is often only an arch breaking of the Modernist rules which fails to fundamentally change what a long time ago became a formalist game.”

… before launching into a scholarly consideration of 20th-century abstraction from its early Russian pioneers such as Kazimir Malevich and Wassily Kandinsky through Piet Mondrian, discussing abstraction’s evolution between the wars alongside the growth of psychoanalysis and its impact on critical theory. The essay is much better rooted in art history and scholarship than I am, but the conclusion it arrives at is one I do believe was commonly shared by general art writing and thinking during the 1980s and well into the 1990s:

“The works of the nonobjectivists are as much unconscious wish-fulfillments as Surrealist works are, but they embody what Ernst Bloch called ‘the principle of hope’ rather than the principle of despair that motivated the Surrealists. Nonobjective works, initially projecting an image of dynamically integrated selfhood—selfhood conscious of its primitive instincts, and balancing them—became a representation of a dynamically integrated society. The artists’ social ambitions confirmed their self regard, gave their art a greater self-esteem than if it had merely been about art—or about themselves, their own egos. But that social estimation of their art was its downfall, because it led them to regard their original ‘experimental’ forms as customary—socially acceptable, matter-of-fact. This eventually made for work as hollow as the representational forms that these artists had condemned, and made the balance or integration their work projected equally repressive of free feeling.”

Abstraction—that ostensible response to the traumas and turbulences of the 1900s and 1910s, which evolved into individual (albeit white, male) artists’ transcendent search for spiritual life in the face of an industrialized world at war in the 1940s—was cold, unfeeling, boorishly intellectual, and sin of sins, corporate and conventional. Again: I’m sharing this excerpt not for argumentative purposes, merely to suggest a larger context for the general attitude toward abstraction that curator App and most of the artists in Order, starting out in the politically and economically grim ’70s, worked amidst.

And, again, it’s a decade that I don’t always associate with abstraction … until I take a moment to think past the usual suspects and remember Black artists such as Al Loving’s and Alma Thomas’ gorgeous 1970s output. Or Sam Gilliam’s collages. Or, a bit later, Ching Ho Cheng’s Torn Paper series. Or even, somewhat poetically, Lee Krasner, the abstract-expressionist and widow of Jackson Pollock, who experienced a late-career flowering and turned out oil works such as “Sundial” and “Mysteries” and prints such as “Embrace” and “Free Space” that finely honed ab-ex’s scowling and agitated angst into a confident buoyancy.

The more you spend time with Order and Uncertainty’s paintings, the more you detect a sense of play, a euphoric streak, and a willingness to embrace not so much an optimistic but at least emotionally available terrain that runs through so many of the works here, in ways that refreshingly dispute those aforementioned attitudes about abstraction’s serious voids.

Boothe’s “Strange Loops” (2021) is a prime example. It’s an oil-on-canvas, 24-inch white square that Boothe’s sectioned with thin black, blue, red, green, and yellow lines that at first glance recall Piet Mondrian, in the glancing way that a drum-break sample momentarily recalls its source song. The hip-hop comparison here is intentional, as sampling fundamentally recontextualizes sound: think of A Tribe Called Quest lifting the bassline to Lou Reed’s “Walk on the Wild Side” and using it to introduce and quickly sketch the melodic flow and bouncing bottom to “Can I Kick It.” Reed was many, many things, but funky wasn’t one of them.

“Strange Loops” similarly summons an initially superficial association, only to move in a different direction: Boothe spaces his thin lines in a more airy composition, including curves and diagonals to yield non-rectangular areas of canvas, and the overall effect is ingeniously bending expectations of abstraction’s determined austerity into a daft Sol LeWitt-y comment. And it’s indicative of the disarming joy that accompanies encountering Order’s paintings in the gallery in ways that rekindle that simple but profound visual pleasure of drinking in the work of artists fully in command of their singular visions.

And only for my eyeballs, Baltimorean Lu and the Californian Krebs serve up the most emotionally complex and satisfying work here. Krebs’ two 20-inch square panels, “Untitled 10-18” (2018) and “Untitled 5-18” (2018), are hung near each other on a single wall, and at first they look exactly like the “bankruptcy mode” castigated in that Artforum essay: single-color squares circumscribed in squares where the hue goes from darker to lighter in intensity as it goes from the outer edges toward the center. Further investigation reveals how complex Krebs’ surfaces are—there’s a faint grid beneath the oil layers, which reads like an optical illusion because it moves in and out of sharpness depending upon which the eyes focus. And her colors—”Untitled 10-18” the velvety oxblood of Doc Martens boots, “Untitled 5-18” the dark gold of a lion’s ruff—radiate surprisingly incandescent energy. They’re surreptitiously giddily intoxicating, as effervescent as a bottomless mimosa brunch, and can catch you unawares if your default setting deems abstract art too serious.

All of which makes the inclusion of Lu’s dizzying “One Hundred Melodies of Solitude, No. 22” so refreshing. App suggests an unspoken continuity of approaches to abstraction across generations that remain outside the conventional art historical narrative. It’s a sly reminder that the history of abstract art, one of the 20th century’s defining creative enterprises, remains incomplete, unfinished, and not just worthy but in need of critical and historical revision. 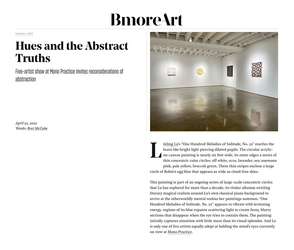 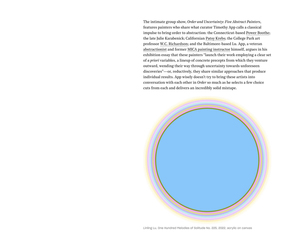 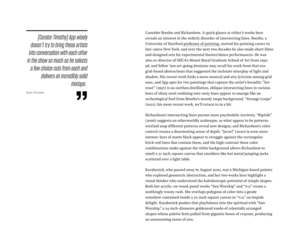 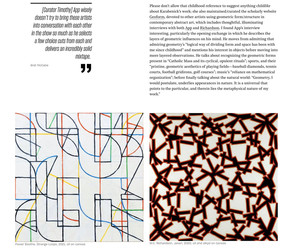 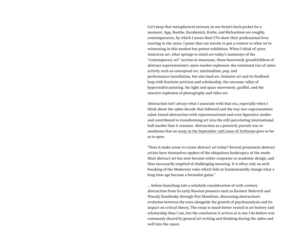 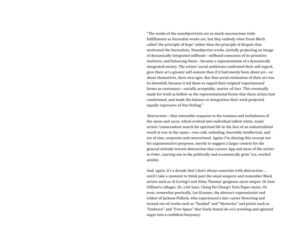 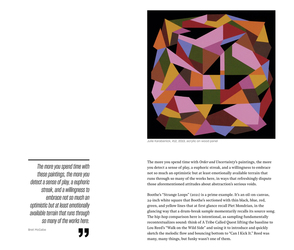 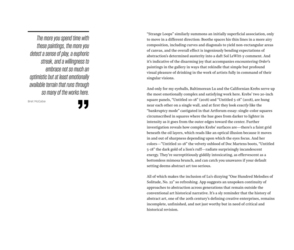 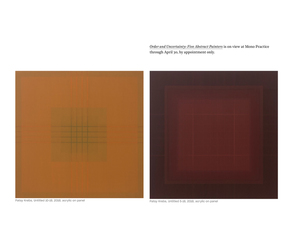